A friend of mine who asked me why I didn't restart SCAMB so I decided to take the suggestion since he is a professional writer.  I'm not saying this is great literature though.

I've been looking for topics for the relaunch and have a few in mind, but to start I wanted to highlight my number one player collection.

I've been a George Brett fan since I saw him play at Tiger Stadium in 1980.  He hit a home run and got into a brawl in the game.  I was hooked.

Like many collector's I've been going through my cards and other things during all of the extra time I've had at home and came upon two card albums.  I think they came with Topps Attax kits that I bought randomly.  They each have 26 pages so I decided to put my Brett cards in them and discuss each page in an installment.

This will be a long term series that will be interspersed with other topics as I find cards I didn't know I had or want to highlight my favorite things in my collection. 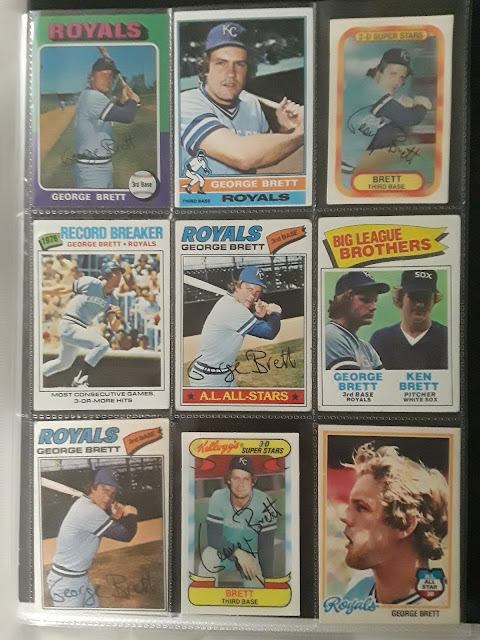 1976 Topps 19
I have an almost complete set of 1976 Topps.  My first baseball card pack was one 1976 pack I bought on the way back from my first MLB game at Atlanta Fulton County Stadium.  I got this card as a single in a hobby store back in the distant past.

1977 Kellogg's 6
My mother never let me have sweetened cereal so I always had Cheerio's or Wheaties.  I never got to pull a Kellogg's card out of a box or send off for them.  All of the Kellogg's cards I have of George were bought on Ebay.

1977 Topps 231
This card commemorates George getting 3 or more hits in 6 consectutive games.  There are hot streaks and then there are HOT STREAKS.  This record helped George win his first batting title in 1976.

1977 Topps 580
Here is the first of 5 consecutive years of the All-Star designation on George's Topps cards.

1977 Topps Cloth Stickers 7
I got this card at a shop about 10 years ago.  It was the only George Brett card the owner had left after someone else had almost bought him out that morning.  Who knows what other gems I could have had if I had been there earlier.

1978 O-Pee-Chee 215
O-Pee-Chee cards are the Canadian versions of Topps cards.  Usually the sets were smaller so the numbering is different.  There is also the added bonus of having both French and English on the back to cater to the Quebecois.

For those who are interested, here are the backs. 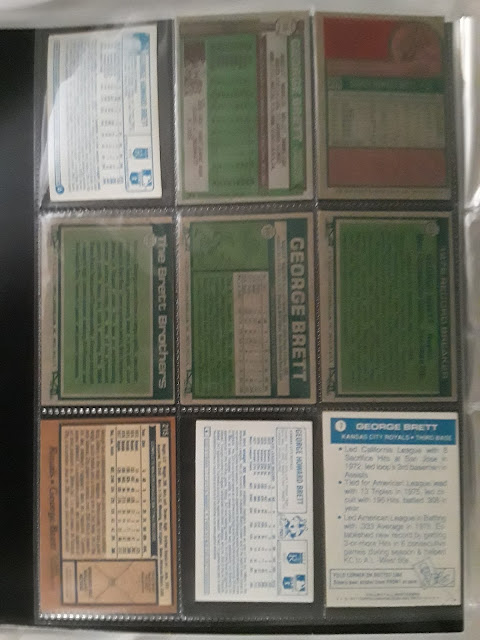 Comments are welcome so let me know what you think about my George Brett obsession.

Cards I Ain't Got No More - Non-Sport Autographs

December 24, 2017
Back in 2010 there were repacks of Donruss Americana and Popcardz that came with one guaranteed hit per repack.  They were pretty cheap and I cleared them out of every Target I went to.  I got a great number of autos and some Popcardz swatch cards from these.

I sold most of the autos but still have a couple of duplicates.


I never saw an episode of The 4400 but have seen Robert Picardo in just about every one of my favorite shows over the years.

I loved watching Night Court!  Who didn't love Bull?  This card is from Smallville, another show I never watched.


Another card from Smallville.  Annette has been in many movies and shows.


A trio of cards from veteran actors that appeared in Alias.


I watched about the first season of Charmed.  I remember Kerr mostly from Dawson's Creek.

Krysten is one of my favorite actresses.  I watched the first couple of seasons of Veronica Mars.

Kinda frustrating but cards did eat my brain so collecting Walking Dead is appropriate.

Here are my best cards:


Morgan has crossed over in to Fear and is ending up as the main hero of that show.  This is as close as I can get to a Fear the Walking Dead memorabilia card.


No idea who this character is but getting a parallel auto out of a Wal-Mart rack box is a good hit.


Here are hits from the hobby boxes I bought a couple of months ago.


Another big hit from a Wal-Mart pre-pack.  This is a 1/1 parallel.


This is my one and only sketch card from any set so it has a special place in my collection.

I tried getting in to the season premiere last week but gave up half way through.  I'll watch football or baseball tonight.