August 01, 2020
I had to go out and about yesterday to run a couple of errands and I decided to stop by the Target in the area to see if they had any cards.  I have to go to Target to look because my local Wal-Mart stopped stocking cards about a year ago when they put in about 1 million self checkout lanes.
The situation at Target was dire as, unless I wanted Pokemon, it had been picked almost clean.  I did manage to get a couple of things just because they were there. 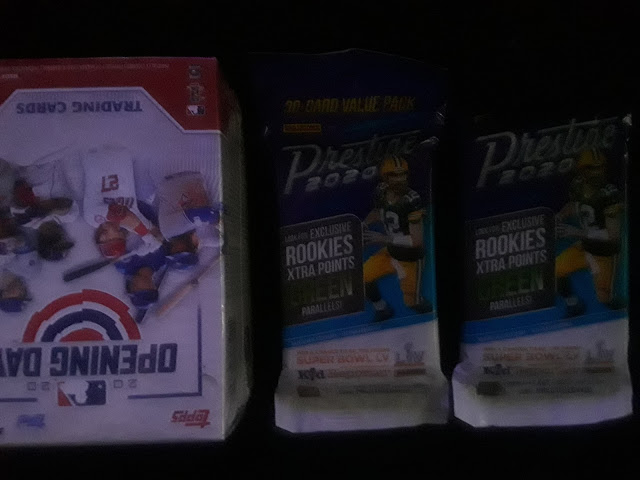 It's hard to see but that is 2 fat packs of Prestige football and a Topps Opening Day blaster.
I left the other Opening Day blaster on the shelf besides some Star Wars: The Mandellorean ones.
It tells you how determined I was to buy some cards that I bought the blaster.  Opening Day is just completely pointless to me.  Topps claims it's for kids but it's just really a reason to put out some clones of their base cards to get more sales.
Here are the highlights of the blaster: 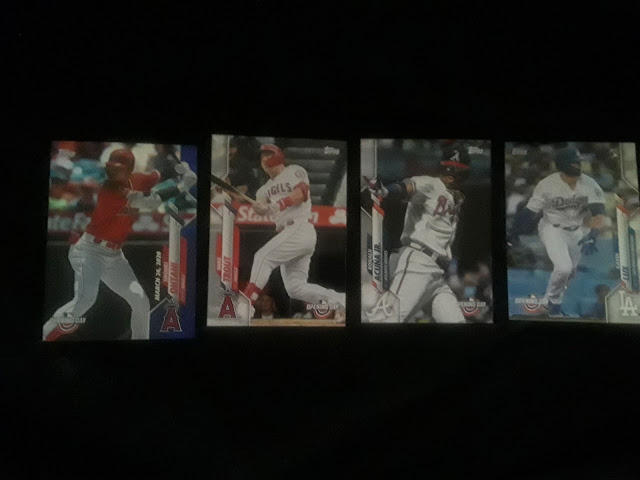 The left most card is a blue Opening Day parallel of Ohtani.  Otherwise it's base Trout, Acuna and Gavin Lux.
I really almost put the two football packs back as I'm not sure there will even be a season this year and Prestige is never my favorite release but, once again, cards!
Here's what I got in the Prestige packs. 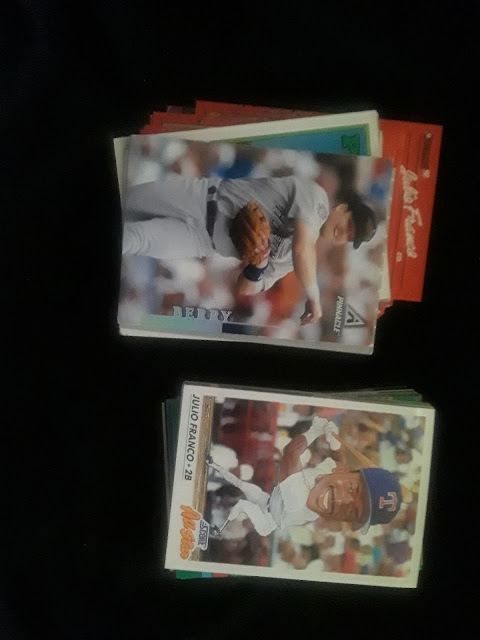 I'm not even bothering to rotate the image of this bunch of #$%#$@.
Some A-hole had gotten the packs in some fashion, pulled the football cards out and filled it with junk wax baseball.  They then sealed the packs back so there was no difference in the feeling of opening the packs.
I'm down $10 with no football cards but I'm an adult and can handle it.  What if some kid had asked their parent for $10 to try to pull a card of their favorite NFL rookie or the parent thought they were buying their kid a present while out shopping?
I really hope the person who did this gets some sort of painful, inoperable cancer and dies a slow agonizing death.  I know that sounds strong but I'm sick of crap like this.
I'm not even going to bother notifying Target because I'm sure they don't care but I will definitely not be buying any more cards from them at any location.
This pandemic card collecting craziness needs to calm down.  People are acting like cards are the only thing that matters.  A real collector would not pull crap like this.
I'll get down off the pulpit now.

August 05, 2020
Any collector that is remotely interested in the history of baseball cards should have at least one T206 card.  I'm not talking about the various modern Topps sets.  I'm talking about the original tobacco set.
If I ever become a billionaire I might pursue collecting the who set but I lucked out a pawn shop almost 20 years ago and came across this beauty.

I don't see dirt, corner or edge wear, a slight crease, etc.   I see a beautiful baseball card.
This is Rube Geyer from the St. Louis Cardinals.  He played from 1910 to 1913 and went 17 and 26.  So not a household name.  Still, it's a freakin' T206.
It has the common Piedmont back so nothing major there.
Oh, and the pawn shop was selling it for $3.
1 comment
Read more