Made another trade happen from Twitter and got 3 1976 Topps I need in exchange for a 1973 Steve Carlton.  That Carlton card documents one of the greatest pitching seasons ever.  The Phillies were 59-97 that year but Carlton was 27-10 and led the league in strikeouts. Wow!

Here are the 3 lovely cards I got back in trade: 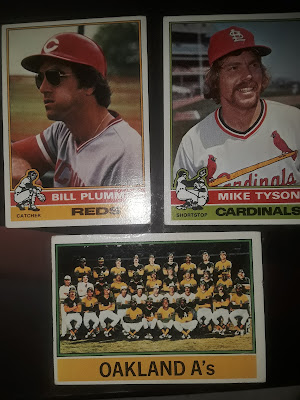 That is Reds backup catcher Bill Plummer, Cardinals SS/2B Mike Tyson, and the team card from the Oakland A's.  This was the last great Oakland team from their dynasty.  They were the 3-time defending World Champions but lost to the Red Sox in the AL Championship Series.

Thank you to the Baseball Card Kid for the nice trade.

Please see my 1976 Topps want list for what else I need.

August 12, 2020
I loved the show Psych so I bought boxes of the two series they put out that covered all of the seasons.  I loved the comedy and themed shows they had.  There were many great guest stars in the series but I got a an autographed card of who I now realize is my favorite actor.
I never fail to enjoy anything I watch Anthony Anderson act in.  He played Gus' cousin Thane in a Psych episode.

As I said before, Psych had many good guest stars over their episodes.  This is another autograph I got from the same box as the Anthony Anderson.I've also gotten some nice memorabilia cards from my boxes.

A couple of months ago USA Network ran a Psych marathon which was nice to have on in the background while I worked at home.If you've never watched the show I recommend it as some comic relief during these tough times.